DAY 19: EMMET OTTER - Creating a Universe Like Our Own 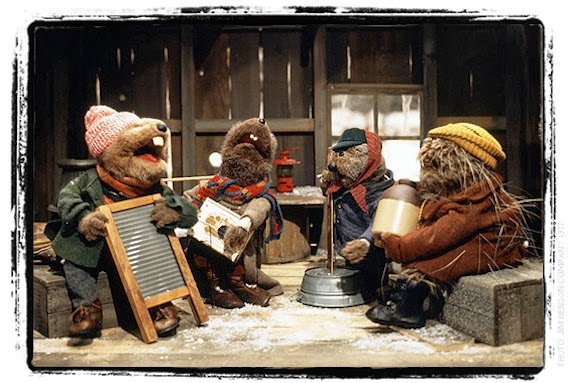 When Emmet Otter's Jug Band Christmas premiered in 1978, I was a third-grader and obsessive Muppet fan living in Detroit. Just two weeks before, Christmas Eve on Sesame Street had aired, so I remember being excited and confused that another Muppet Christmas special was airing. From the very first shot, the show was different than any other Muppet effort I'd ever seen. Everything Muppet-related to that point was designed for closed television sets. Zoom lenses could give an appearance of depth, but the framing of The Muppets up until then was still very similar to the closed puppet stages that had been used for hundreds of years. The first shot of Emmet Otter, however, was a helicopter. Okay, technically, it was a crane shot built over a miniature version of an entire town. But it was an entire town! Houses. Churches. A river running through the valleys at the base of frost-covered hills. Birds flying in the sky. In one shot, Jim Henson had taken The Muppets out of the confines of the puppet stage and put them... out in the world. 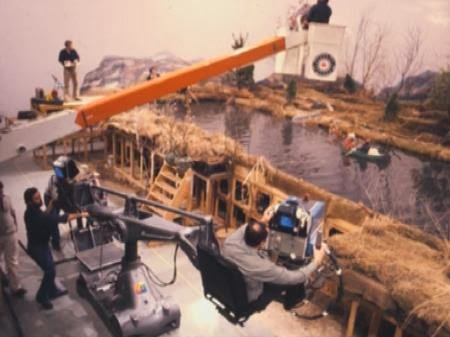 And not just any world. For me, it was a world that looked just like the rural areas and small towns around my parents' hometown in central Ohio, an area I had idealized in my brain after becoming our default family trip location for my entire life. The houses looked like houses I knew. The hills looked like the hills we drove over to get to my grandparents' houses. And suddenly, this areas I felt I knew (and loved) was populated with Muppets. And not just any Muppets. Sure, the traditional hand-and-rod Muppets still existed. But now there were cinematic medium-shots of marionettes wandering across large open fields, and we could see their feet walking. Muppets window-shopping down a traditional small-town lane. Remote-controlled Muppets rowing a rowboat down a river and singing. Muppets driving hot rods and riding snowmobiles. I was too young to understand what a technical tour de force Emmet Otter's Jug Band Christmas was. It was a launching pad for Jim Henson, his career would later be a series of universes he created, whole-cloth from his imagination. But Emmet Otter was the first. And it brought Muppets into a world I recognized.

And that was (and remains) the power of Emmet Otter's Jug Band Christmas, for me. The lesson of the story is more cohesive version of O. Henry's The Gift Of The Magi. It's about the magic of selfless giving and sacrifice, but in the end, Emmet and Ma Otter realize that their strength lies in their togetherness. It's a beautiful lesson, both in Russell Hoban's original text and in the Jim Henson version (voiced beautifully through the words and music of Paul Williams). But it was never the lesson that made Emmet Otter one of my favorite pieces of television history. It was that Jim Henson created a universe. A likable, wondrous universe. And not a fantasy universe of dragons and elves or a science fiction universe of androids and stormtroopers. Henson's universe was a universe of otters and gophers and porcupines and foxes. Yes, they played instruments and drove cars and wore hats and ate at restaurants, but no individual element of the universe was unknown to us. It was merely a re-imagining of the existing elements of our universe, placed in unique situations. It was an askance view of a world we already knew, and by viewing that world slightly differently, we're given insight into the depth of things we already knew, but never took the time to consider. 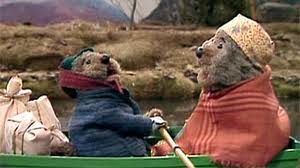 Ma Otter sings "When The River Meets The Sea". It was a song that would later be recorded for John Denver & The Muppets A Christmas Together album, and one that Jim Henson would use as a Christmas song on a few occasions. It's a beautiful Paul Williams song, but it's a meditation on death. Not a sad meditation, necessarily, because it's central premise is that death brings about answers and wisdom and frees us to be born again.


"When the mountain touches the valley, all the clouds are taught to fly
as our souls will leave this land most peacefully.
Though our minds be filled with questions, in our hearts we'll understand
when the river meets the sea."


It's appropriate that the song appears twice during the special. The first time is when the river Emmet and Ma use for transportation has frozen over, yet Emmet and Ma find solace in the ice slide Emmet's departed Pa had built for them. The song then closes the special out, after Emmet has destroyed the washtub and Ma has sold Emmet's toolbox and - in the wake of these massive losses - they found salvation in each other. Even these musical cues follow the same pattern as the rest of the special. A traditional Christmas special would emphasize the obvious Christmas theme - salvation is our gift from God. In Emmet Otter, that lesson exists, but in an askance view of the world. Salvation is our gift from God, but only after death and loss, which is an equally-wondrous gift from God. 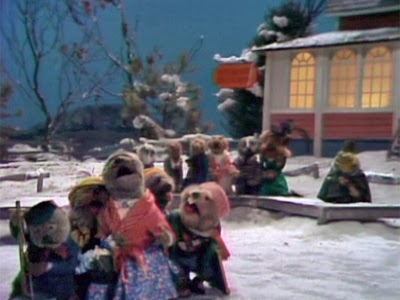 I've owned Emmet Otter's Jug Band Christmas in one form or another (VHS, DVD, MPEG) for more than 25 years. I'm certain no Christmas season has passed without at least one viewing. And even today, the power of Emmet Otter remains as obvious to me as it did in 1979. Every time I watch it, I remember the wondrous And as the credits roll and the arrangement of "When The River Meets The Sea" turns from somber to a jug band version of a Dixieland post-funeral procession line (it is no coincidence that Jim Henson's memorial ended in a similar arrangement), I'm reminded that their are entire universes out there to be built. And they can be built from the ashes of what has been destroyed before. And they don't even need to be unique or mystical or fantastic. They can be as plain as gingham and iron washtubs.

We just need to build them.