DAY 329: RESERVOIR DOGS - An Open Letter to Everyone who stormed out of the Lincoln Theater in Chicago that night in December, 1992 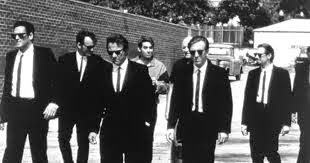 Dear people who stormed out of the midnight showing of Reservoir Dogs at the Lincoln Theater in Chicago that snowy night in December 1992,

Weird that I should still be thinking about you all these years later. Weird that I can remember the weather, and where I sat in the theater (aisle seat, two rows from the back). And I can’t remember any of your faces, but I remember you leaving. It was around 1am and snowing in Lincoln Park, the week between Christmas and New Year’s, and yet you were hustling out of the theater. Most of you seemed angry. All of you left with a quick step and a refusal to look back at the screen your heads down as if ducking from an assault of flying objects coming off the screen. More than anything, I remember feeling puzzled. Reservoir Dogs had only been in theaters for a few months, and was never in wide release. It had become a cult favorite at these midnight screenings. That night was the first of many midnight screenings I would attend, and all of them had people like you. People who hung around for awhile, and then usually left right around the time Mr. Blonde (Michael Madsen) began torturing the kidnapped cop. Over the years, I’ve tried to figure out why you left that film, and I’ve questioned people who didn’t like the film the way I do. Most of them describe the film as being overly-violent. In each case, they can describe (in gruesome details) the violent scenes that upset them the most. There’s usually only one problem when they do that. The scenes they describe don’t exist.


Reservoir Dogs is a bloody film, no doubt. From the first frame after the opening credits, the film is splashed with huge amounts of blood. But it’s not a particularly violent film. There are two brief shoot outs between the thieves and police. A woman is pulled from her car through the driver’s side window during a carjacking. And Mr. Orange (Tim Roth) is shot through the stomach and returns a fatal shot during another carjacking. By contemporary crime movie standards, the amount of violence in Reservoir Dogs is minimal. But the ever-present blood makes it feel more ominous; the presence of seeping death from gunshot wounds is a constant reminder of the violence just barely underneath the surface. 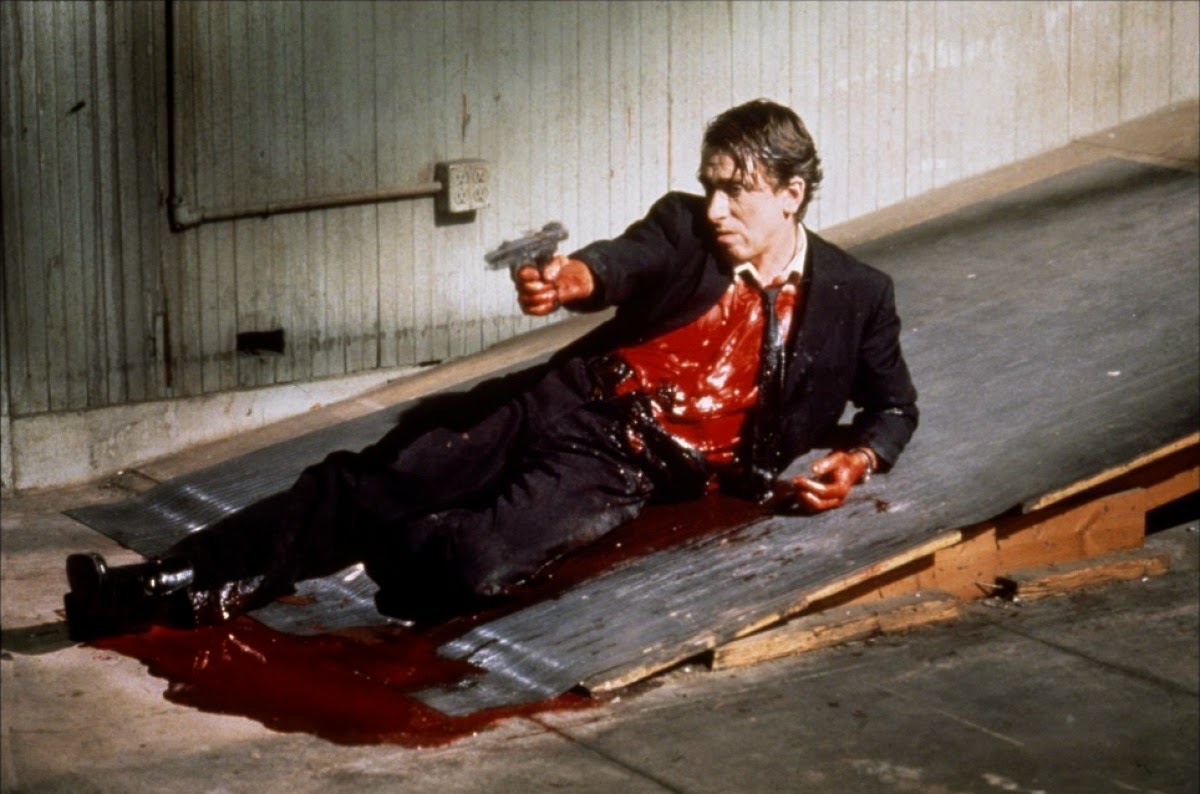 The irony of storming out after Mr. Blonde mutilates the police officer is that we never actually saw the mutilation. Quentin Tarantino stole a trick from Scorsese in Taxi Driver; as soon as Mr. Blonde straddled the cop with the razor, the camera panned up and to the right. We were staring at a blank wall and a doorway as Mr. Blonde sawed the cop’s ear off with a straight razor. And the cop was muffled with duct tape, so we didn’t even hear screaming. We simply looked away via the camera, much the same as we would have done in real life. In Taxi Driver, Martin Scorsese would let us watch child prostitutes and murderous rampages, but when Travis Bickle was finally rejected by the woman he was obsessed with, he forced us to look away. Some things are too painful to actually watch. Tarantino knew this, as well, and kept us from viewing the gory details. We saw the before and the after, but during the act, he effectively covered our eyes and turned our heads for us. And yet, you still left the theater. 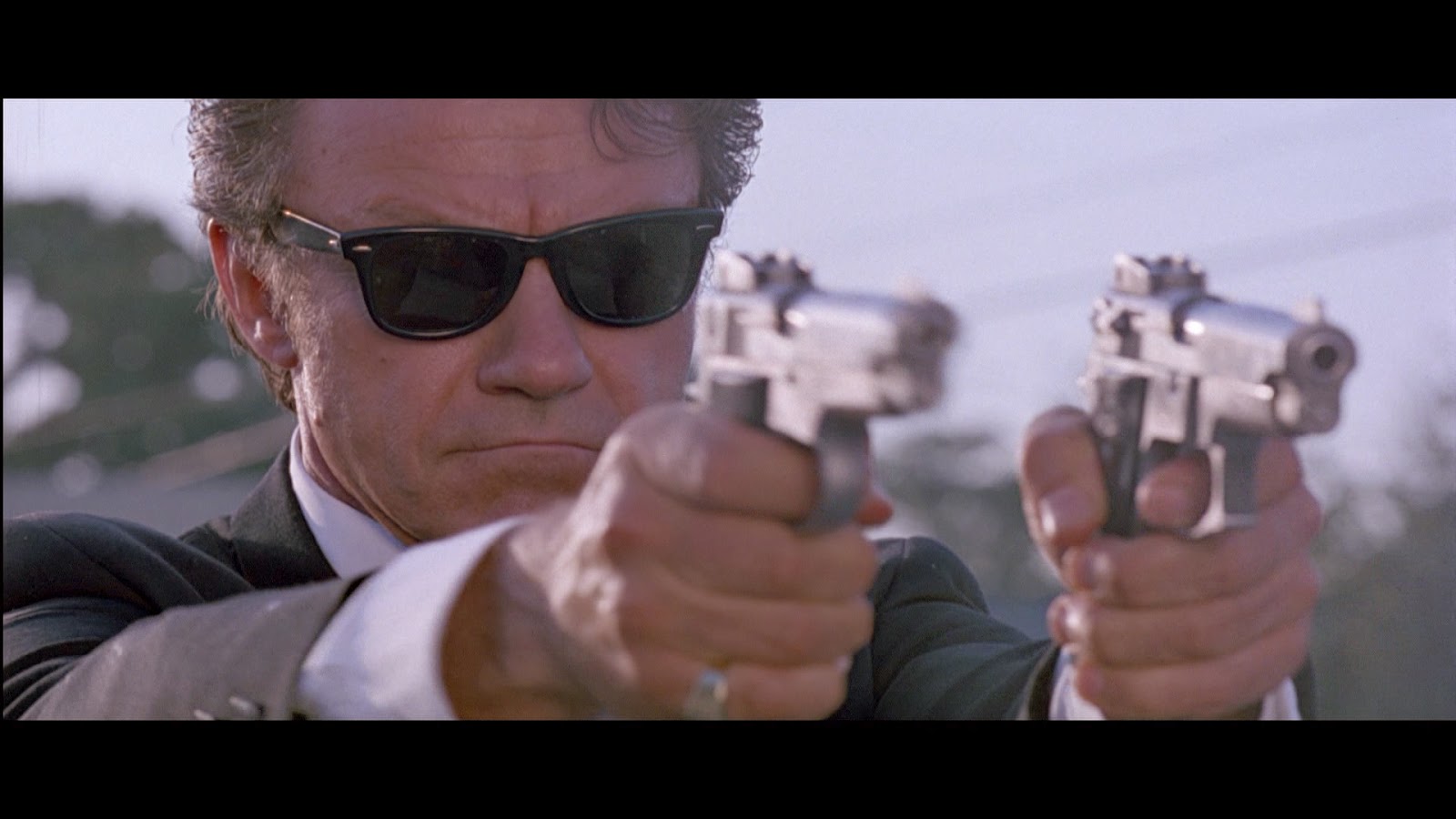 By leaving the theater when you did, you sent a strange message. I had watched the same scene as you, and I had recalled the Taxi Driver scene as the camera panned away. I had been struck at how masterfully Tarantino had avoided on-screen violence – particularly violence that likely would have looked cartoonish and special effects-laden in close-up. But that same avoidance chased you from the theater. Because Reservoir Dogs did one thing very well; it not only provided narrative gaps for us to fill, but it demanded that we fill them with our own imagination. Tarantino’s command of the story’s timeline allowed him to jump forward and back through the story. It allowed him to show us the characters in states of tremendous stress, and then go back in time to meet them as people. It was late in the movie – which you missed – where we got to see what had caused them to be panicked or shot or furious or psychotic. But by that point, it barely mattered. We had been living in our own imagination so long, the actual story was sad and weak, by comparison. When we finally saw how Mr. Orange was shot through the stomach, the events were pathetic. They lacked glamour or grit. He carelessly opened the door to a car he was carjacking. The woman inside grabbed a small-caliber pistol from the glove box and shot him as the door swung open. He returned fire in a panic, and killed her with a single bullet shot to the head. The entire event occurred so quickly, and with so few dramatic cuts, that it could have been mistaken for a comedy of errors, had it not been for the final shot: Mr. Orange, lying on the ground with a bullet wound and a smoking gun (both off-screen), trying not to cry over shooting an innocent woman.

Or was he? Was he simply crying from the pain? 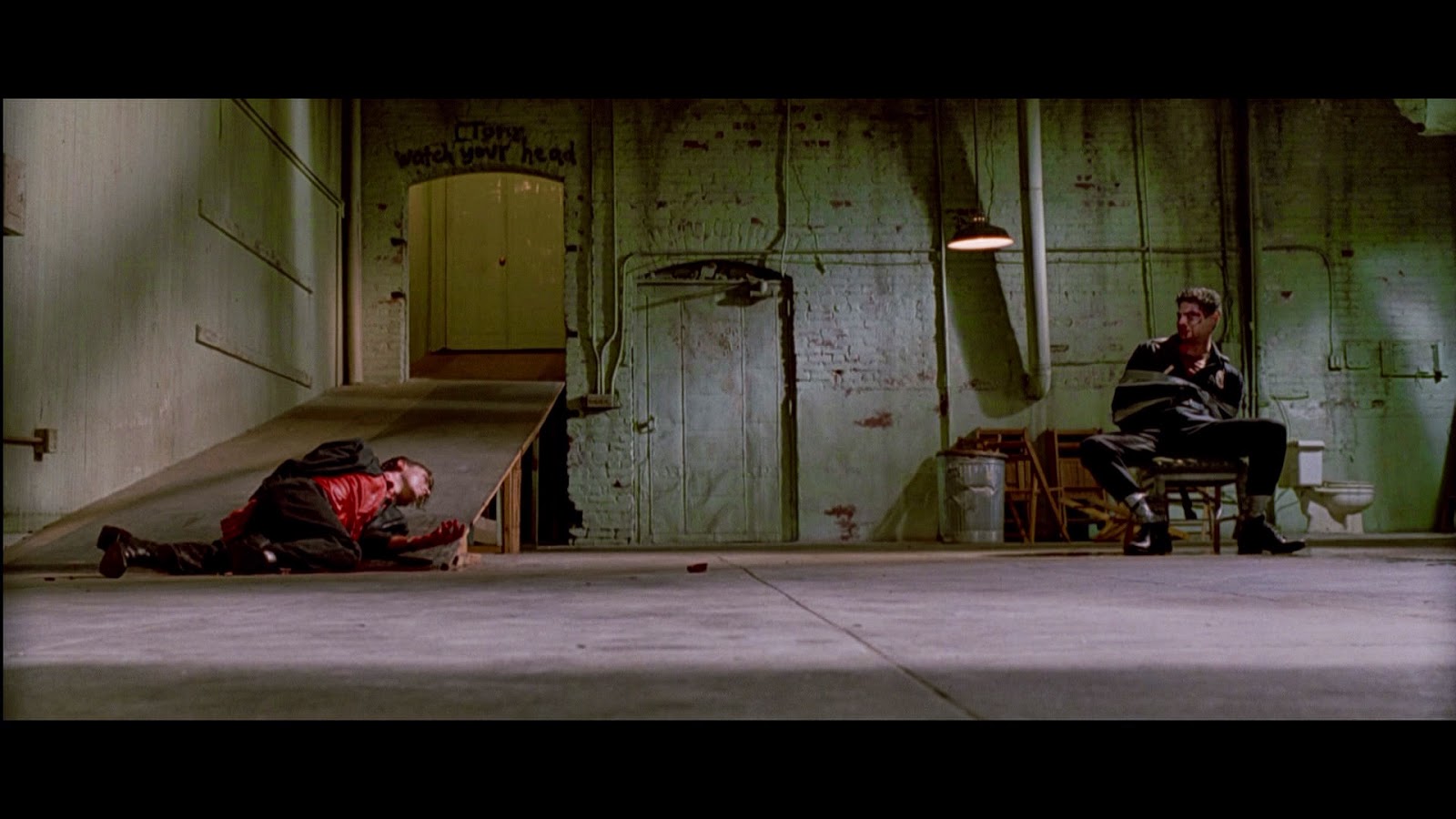 That’s the thing about Reservoir Dogs. It’s a simple heist picture, yet we put our own interpretation all over it. And what scared you as you watched it was not what Tarantino was creating. What scared you was what was in your mind. A few months ago, I wrote about Bob Newhart and how Newhart’s genius was the trust he had that an audience would be smart enough to fill in the blanks and make the comedy work. But Newhart was prescriptive. The blanks he asked you to fill were well-defined, just unspoken. Tarantino, on the other hand, provided a blank slate. The levels of violence and gruesomeness that filled those blanks was a product of our own making, not of his. And so as you rushed out of the theater, I had to wonder what you had seen, and more importantly, did you truly believe you could escape it by leaving? 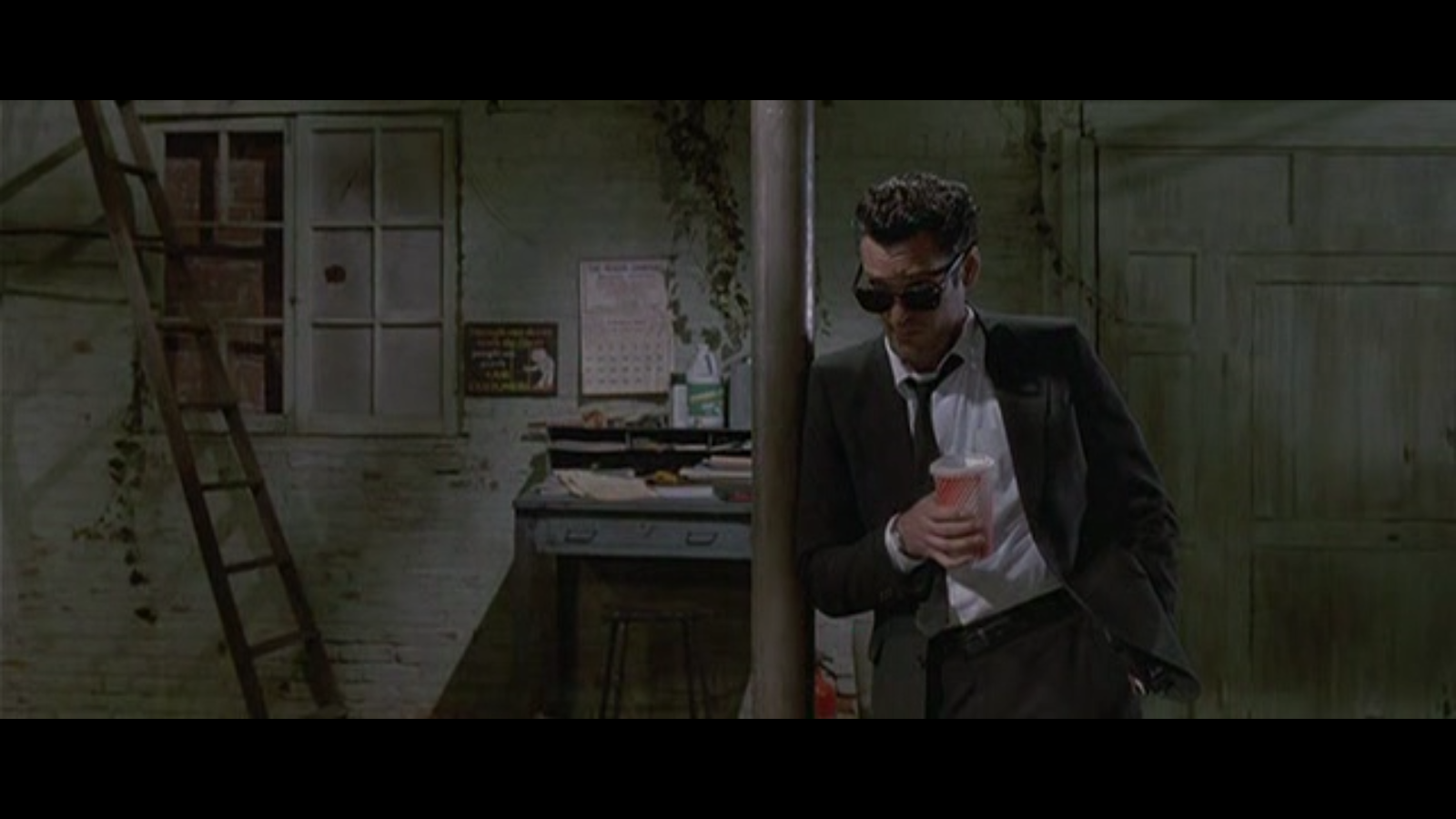 Believe me, I understand the power in the stories that spin from our imagination to answer the unanswered questions. As humans, we crave certainty. Our brains demand contextual details. It’s not enough to know what happened, we innately search for “why” and “how”. We imagine the “wheres” and the “whens”. We ascribe intention and motive where it may not even exist. Our search for meaning and context overrides any sense of logic or inhibition. Our brains are not wired for “wait and see”, and the way we choose to fill in those blanks is a direct reflection of our mental state. I have friends who choose to see the positive in every situation. They assume every strange circumstance is the result of noble intentions and hidden kindness. Other friends view everything with suspicion and derision, as if every simple coincidence is evidence that the world is intentionally conspiring to make them miserable. One of these groups is consistently more happy than the other; I’ll leave it to you to fill in that blank.

I guess the reason I still think of you is because you remind me of myself. Because you walked out of one of my favorite movies. Midway through a cinematic masterpiece, you walked out. Not because it was bad, but because of a story you had created in your head to make sense of the story in front of you. And the story in your mind was so grotesque and frightening, you missed the masterpiece in front of you. And I do that. Many of us do. We obsess over the meaning behind things to the point that we erode their meaning. We prefer to compromise relationships and weaken trust than to live with uncertainty. Our lives are filled with gaps that we live in fear of, not because they’re filled with monsters, but because we chose to fill them with monsters just so we can run away. How many masterpieces have I missed because my imagination was more powerful than an incomplete reality? How many relationships have I compromised with information I created out of fear? How much of life have I missed because I chose to see what was never there in the first place?

So it’s been more than twenty years, and I still think of you sometimes. I hope your night was okay. I hope you found a comfortable bar or an all-night diner and sat and unwound and forgot about the things that chased you from the Lincoln Theater that night. I hope you laughed and smiled. And I hope you enjoyed the snowfall and the charm of the holiday season. And I hope for you the same thing I hope for myself - and for everyone, for that matter. I hope your life can be filled with more of those moments. Moments when the snow falls, and we don’t need to know why. We don’t search the darkest recesses of our minds for answers or motivations. When we don’t mistrust the moment or assume it’s out to get us. We just let the snow fall. We smile without thinking. We experience moments where the monsters are kept at bay without even trying. And for the moment, we get to experience life as the masterpiece it is.