September 20: "THE INDIAN RUNNER" - The Intimidating Legacy of Fatherhood 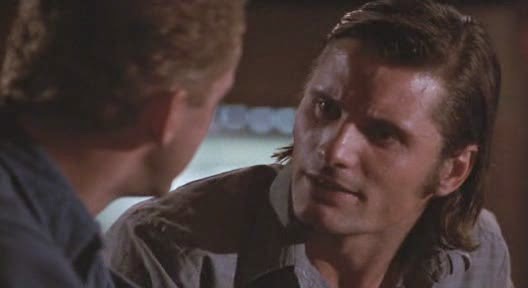 I was 21 when Sean Penn released The Indian Runner, his first film as writer and director. I had been a Sean Penn fan before that, but watching The Indian Runner cemented my fondness for the man's work. It was clear upon the first viewing that Penn and I shared many of the same influences and tastes. The film was based on Springsteen's song "Highway Patrolman", off his album Nebraska, which was - at that time - my favorite Springsteen album. The visual style was reminiscent of great 70s directors I was obsessing over at the time: John Cassavetes and Hal Ashby. The theme of the song was reminiscent of Austin and Lee in Sam Shepard's True West, a play I had read at least a dozen times, by that point. One of my favorite authors, Harry Crews, made a cameo. The cast was loaded with many actors I loved, all giving some of the greatest performances of their careers. More than anything, I was drawn to Viggo Mortensen's portrayal of wayward younger bother Frankie, who half-heartedly struggled to keep a lid on the boiling cauldron of toxic violence within his soul. Frankie had the kind of self-loathing typical to young men; it lashed out at the world regularly, and any attempts to soothe it were met with violence and humiliation. At 21, I understood that particular self-loathing. But as the years went on, my view of the world changed. Slowly, that self-hatred turned itself around. Slowly, "the world" stopped being the problem, and any lashing out I did was actually "lashing in" - a long, protracted soul-flagellation for not being able to understand the world better. Self-directed anger for never seeming to fit in. For not being good enough for anyone. For never finding a consistent way to stay happy or satisfied with myself. By the time I reached forty, the world was a perfect place which operated by a logical set of rules that everyone seemed to understand intuitively. It was only marred by me. And my inability to understand it. And the many failings that I brought to it. 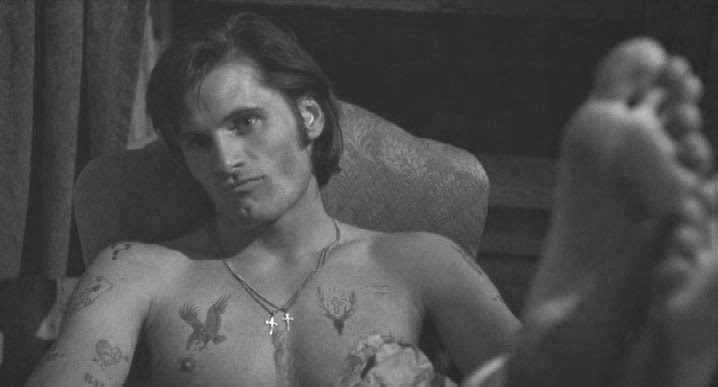 Which made it even stranger to watch The Indian Runner a few years ago and realize that it still affected me powerfully. I had expected to like it nostalgically. To remember the way it had made me feel when I had first discovered it. Nostalgia is a gift. We remember the better parts of a memory, but polish over the moments of despair that brought us that place. Whether it's The Indian Runner or Black Flag records or The Dukes of Hazzard or Andrew Vacchs novels, even if I no longer emotionally connect with them, I have a fondness for them without having to re-live the misery that made them once feel important - even life-saving. But The Indian Runner still felt important. It still felt relevant. In fact, it felt more relevant than it did twenty years ago. Because I didn't understand at 21 that The Indian Runner isn't about the misplaced, self-loathing fury of youth; it's a film about fatherhood.

When I would view the movie in my twenties, I watched Frankie's struggles with the world. The other significant male lead characters all seemed to be struggling, as well, although I assumed they were all struggling in response to Frankie's outrage. It was a very personal, immature interpretation of the film, with the frustrated troublemaker at the center of everyone's universe. But that wasn't it. Each character seemed to be struggling against the definition of fatherhood that the other characters represented. It's a common struggle; we hate certain traits we've inherited, we long for traits we didn't, and we deny credit for traits we wish we had developed on our own. We want to believe that we grow into adults based solely on our own decisions, and direct influence only exists inasmuch as we have allowed it to exist. And when men reach adulthood and then enter into fatherhood, that reconciliation becomes even trickier. Because our lives are filled with hundreds of adults as we grow up, and we can be influenced by all of them. But father figures are far fewer. Our paternal influences are limited, and that scarcity imprints itself strongly on who we are, whether we like it or not. And so it's more difficult to reconcile the father we want to be with the father we were raised to be. These are the themes of The Indian Runner: fathers failing at being fathers, sons failing at being fathered, and sons hoping to avoid fatherhood any way they can. 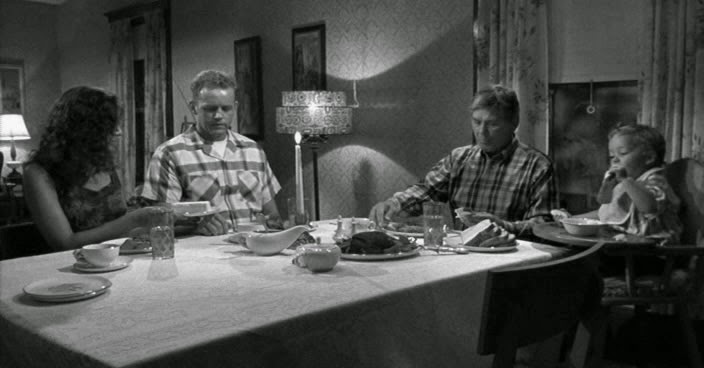 Throughout the film, Joe claims to love fatherhood. He claims it's his only reason for living. It's what heals all the wounds of failure in his life. And yet, he never almost touches his son throughout the film. He rarely pays attention to him. After his own father commits suicide, Joe sits outside under a tree while his infant son plays with toy trucks in front of him. Joe stares off into space, seemingly unaware the boy is nearby. Joe seems to love the idea of fatherhood, but has no real connection to it, which he clearly learned from his own father, played masterfully by Charles Bronson. In all of their scenes together, Joe and his father are framed as far apart as possible from each other. Penn rarely shows them in a frame together, and then he does, they sit almost at odds with each other. Swinging on the porch swing after the death of Joe's mother, the two men sit as far apart on a three-man swing as possible. They don't touch. Despite the fact that they seem to share a fondness for each other, they're body language and awkward interactions tell a story of distance. A story of two men politely sharing uncommon ground for unspoken - possibly unknown - reasons. When Joe finally does touch his father, it's when he crouches down to inspect the puddle of his father's blood left after his father's suicide. Joe crouches down and runs his fingers through the blood and inspects it, like a farmer inspecting the soil for moisture and nutrients, seeking clues about the coming harvest. Joe's first on-screen touch of his father is an attempt to glimpse the future, and what he finds clearly has an impact on him. When Frankie later tells Joe that married life and parenthood aren't enough to make a man happy, Joe slashes his own hand with a broken glass and bleeds for Frankie. "That's all there he is," Joe explains. Frankie refuses to believe that fatherhood is enough to make a man satisfied; Joe may not truly believe it, either, but he - like his father before him - is willing to die to hold onto that belief.

The title of The Indian Runner is explained during a drunken night Frankie and Joe spend on Joe's foreclosed farm. Frankie describes a story passed down to them from their father about "Indian runners" who carried messages between tribal camps. "Independent of time and space," Frankie recites, "the Indian runner becomes the message!" Just as their father had become his message until the isolation and loneliness became too much for him to bear. Just as Joe had become his message, despite actually having an aptitude for it. Just as I have. Just as all men who willingly enter into fatherhood have. We become our message, crafted by the generation before us and delivered unto the generation after us. Whether we like the message or not, we'll carry it. For some of us, the horror of that is too much to bear and like Frankie, we'll avoid it in any way possible. Others accept the message and hope to change it, with no real awareness how. 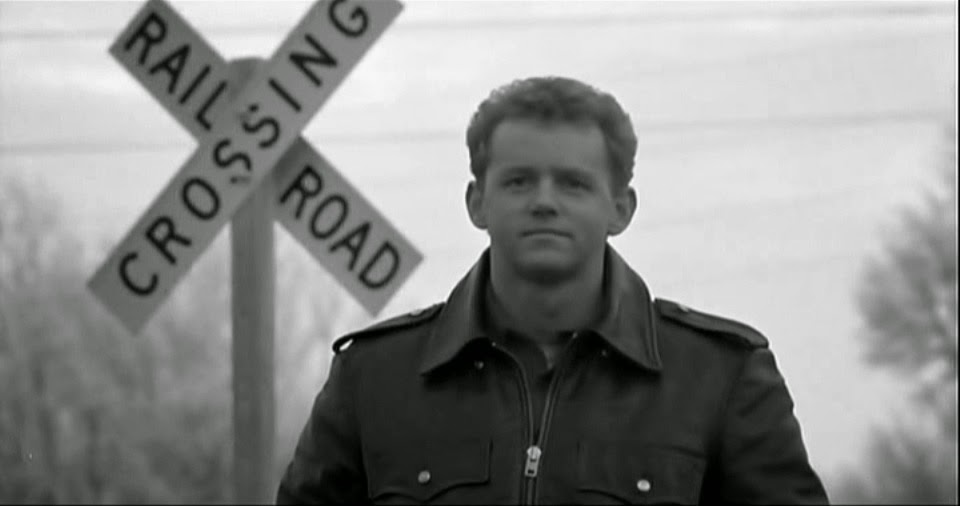 The film closes with an epigram from Tagore: "Every new child born brings the message that God is not yet discouraged of man." We may kick against the message, but as fathers, we're required to carry it. To become it. And to run between the generations with it. Avoiding it just becomes its own message. As does blindly accepting it. Perhaps the best we can hope for is to carry the message in our own way. Not all the time. Not all the way. But here and there, we break free from the parts of the path we dislike and edit the message slightly. God has not tired of us, so we run. Step by step, we carry a message, and if we're lucky, we deliver a better message than we received.