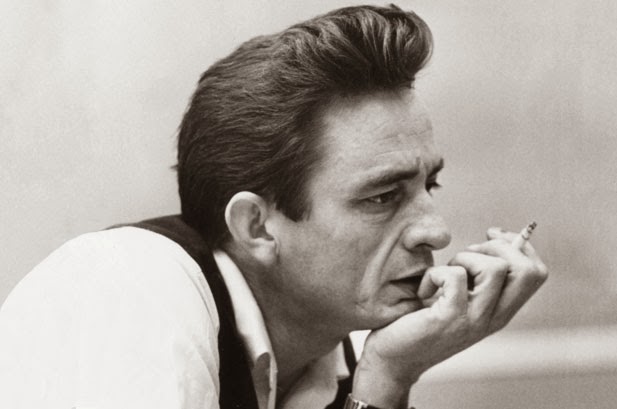 When you consider it, the natural resiliency of the human spirit is amazing. In a world filled with so much stress, with so many problems and so much legitimate despair, it's fascinating that humans hang in there as well as we do. The continued hardship of life, of economics, even people facing terminal illness fight to the bitter end. This is not to say that suicide and the complete loss of faith or hope doesn't exist, or that its existence isn't as sad and horrifying as it seems. But if we truly look at the numbers, of earth's more than six-billion people, only around 0.000016% in a given year give up completely and end their own lives. That leaves an extremely high percentage of people who either consciously or subconsciously are holding onto something tightly enough to make living meaningful. Some people are lucky enough to have an abundance of reasons to stick around; others are not so lucky. And perhaps one of the greatest blessings we can offer as humans is our own ability to be something for whom people want to stick around. 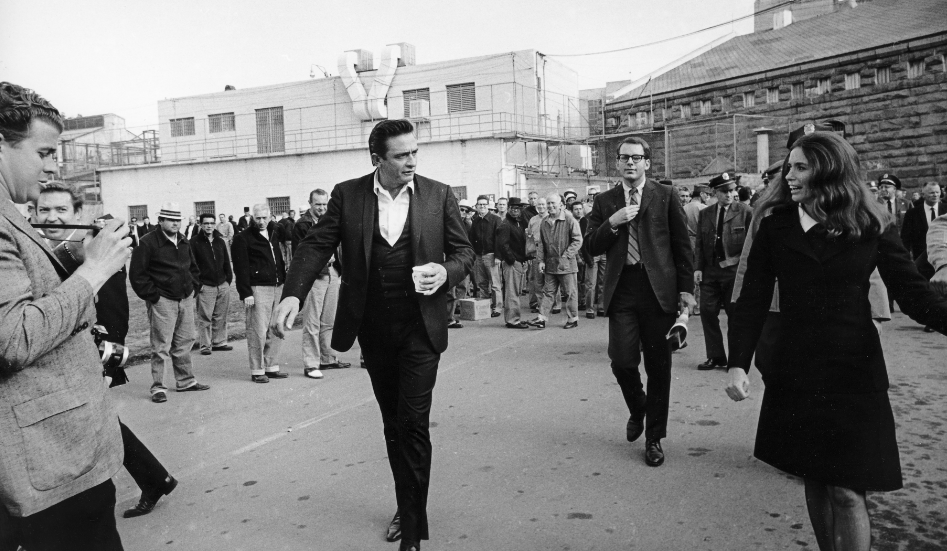 Johnny Cash had a moment similar to this in 1967. After years of addiction to pills (both uppers and downers), Cash had been arrested in Lafayette, Georgia for possession of narcotics. After spending a night in jail, the sheriff of Walker County gave Cash a long lecture about wasted potential. Riddled with a mixture of hope and guilt, Cash left Lafayette with the hope he could beat his addictions. But he couldn't. Soon after, Cash went to Nickajack Cave outside of Chattanooga. Drugs had taken his first wife and children from him. Drugs kept him from being able to marry his current love, June Carter (she refused to marry him until he kicked his habit). Furthermore, his career had stalled. Cash wandered deep into Nickajack Cave exhausted, strung out, and prepared to die in the waters at the base of the cave. Walking deeper and deeper into the cave, Cash finally collapsed from exhaustion, prepared to give up his life. It was here that Cash claims to have felt God's love in his heart. Despite exhaustion and drug impairment, he found his way out of the cave following tiny shafts of light and barely-perceptible breezes. Outside of the cave, Cash quit drugs. June re-introduced him to the Bible, and he treated his escape from the cave as both a literal and a spiritual rebirth. Within six months he had married June and was working on re-starting his stalled career. 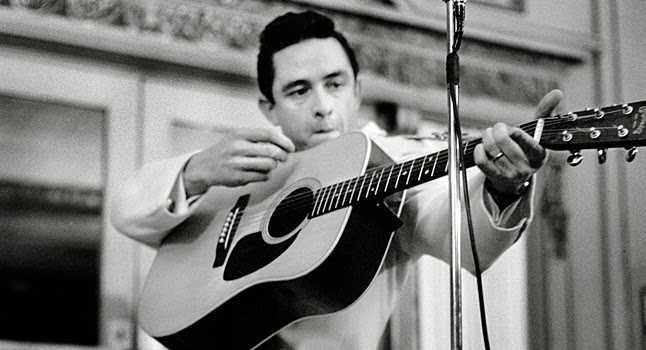 Ever since Cash had seen the movie Inside The Walls of Folsom Prison while in the Air Force in Germany, he had been interested in prison life. Seeing the movie had inspired him to write his second single, "Folsom Prison Blues". The song was such an accurate portrayal of prison life that people would assume from then on that Cash had served time in prison. Prisoners would send him fan mail, and ask that he come play a concert at their penitentiary. Cash was known to oblige, occasionally, playing prison shows as early as 1957. When he considered what creative move might re-ignite his career, he thought of recording a live album in a prison. The idea spoke to everything he seemed to like about Jesus, whom he had begun studying with a re-born passion. Jesus spent time with the "least among us" in his society. He believed in redemption and forgiveness. He believed in charitable giving and a lack of judgment. And he lived by example. Rather than chase money and fame, Cash would perform in a way he thought Jesus might. When his managers sent out requests to prisons, the first to reply was Folsom State Prison in California. 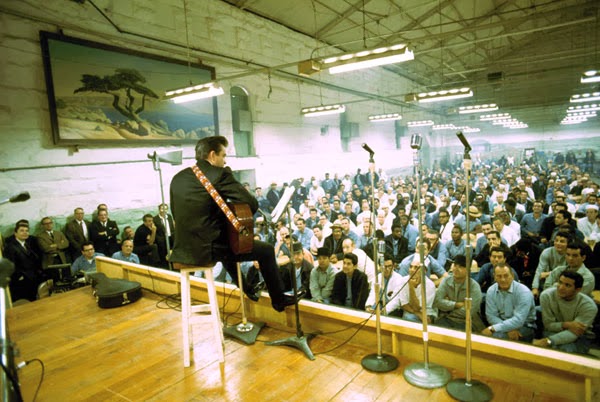 The performance itself was important for a few reasons. Starting in the mid-1960s, country music had begun to align itself with the pro-war conservative "Silent Majority". Beginning with anti-protest songs like Dave Dudley's "What We're Fighting For" and "Viet Nam Blues", and leading to pro-military songs like "Distant Drums" by Jim Reeves, "Ballad of the Green Berets" by Staff Sgt. Barry Sadler, and "Dear Uncle Sam" by Loretta Lynn. Without its own agreement, country music became the de facto art form of pro-war conservatives. Even though the hit songs of the 60s were typical country topics of drinking and heartache, pro-war fans of country music still considered it the musical form of true American values. Those American values included a black and white, law and order premise. But Cash wasn't so sure he agreed with those politics. Having found Jesus, Cash recognized that Jesus Christ would never turn his back on the poor and the incarcerated. The penal system is a method of quarantine as much as a method of rehabilitation; it exists more to keep criminals "out of sight, out of mind" than to prepare them to rejoin society. And Cash saw the folly in that. The Jesus he had discovered was a humble man who preached forgiveness for everyone. For Johnny Cash, who had spent years doing free concerts for prisoners, he saw the appeal Jesus found in showing compassion for the lowest, forgotten members of society. "Law and order" and war were not the political stances Johnny Cash wanted to take. 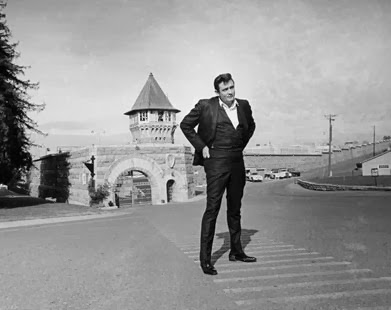 By performing in a prison for the first album in his comeback, Cash was making huge statements. He was breaking the color barrier in country music, as inmates at Folsom were of all races and nationalities. He was sending a message about the direction he wanted country music to take. But more importantly, he was giving hope to the inmates of Folsom Prison. Playing to a giant room filled with men who had slipped far through so many of the safety nets of society (schools, churches, family, community) to end up in prison, and Cash came - friends and family in tow - and he sang for them. He made them laugh. He made them cry. He ended the set with the song "Greystone Chapel", a song about the chapel at Folsom, written by inmate Glen Sherley (who was sitting in the front row of the crowd, unaware that Cash knew his song, much less that he would close the set with it). The light he brought to Folsom Prison was more than mere entertainment, more than an opportunity to let prisoners forget their surroundings.


What Cash was providing was a rope up. Maybe the final rope for some. Maybe one of many. But it was a rope up. Logotherapist Viktor Frankl, in his autobiography of his time in Nazi concentration camps, claimed that one thing keeps people going when every bit of logic says they should give up: love. Describing a moment where his fellow campmates were building a road in frost-biting snow, Frankl realized:


A thought transfixed me: for the first time in my life I saw the truth as it is set into song by so many poets, proclaimed as the final wisdom by so many thinkers. The truth--that love is the ultimate and the highest goal to which man can aspire. Then I grasped the meaning of the greatest secret that human poetry and human thought and belief have to impart: The salvation of man is through love and in love. I understood how a man who has nothing left in this world may still know bliss, be it only for a brief moment, in the contemplation of his beloved. In a position of utter desolation, when a man cannot express himself in positive action, when his only achievement may consist in enduring his sufferings in the right way--an honorable way--in such a position man can, through loving contemplation of the image he carries of his beloved, achieve fulfillment. For the first time in my life, I was able to understand the words, "The angels are lost in perpetual contemplation of an infinite glory."

Cash walked into Folsom Prison to provide those men with music. Music they could love. Music that could give them hope, or inspiration. Unlike the "law and order" crowd who shuttled them aside and hoped to never see them again, Cash spoke in the language of Jesus. He gave them something to love. He gave them a rope. And with any luck, more than a few men grabbed hold. Playing to prisoners was no tough guy/outlaw pose. This was Cash at his most Christian: filled with forgiveness, filling the hopeless with the one thing they truly need - love.