February 20: HUNTER S. THOMPSON – Too Exhausted To Live, Too Curious To Die 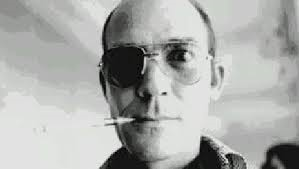 When Hunter S. Thompson shot himself ten years ago, I was saddened but not necessarily surprised. I rarely consider how people I admire are going to leave this world, but Thompson was one who seemed destined to leave this world the way he lived within it – completely on his own terms. It was the kind of life that couldn’t help but attract controversy, and so for Thompson to slowly face away and be laid to rest gently in a quiet Aspen cemetery was inconceivable. It would have been a travesty. And so as sad as I was to see him go, I was relieved that he got to leave in a manner that felt appropriate to me. It feels odd to say that an unexpected gunshot to the temple is an “appropriate” way to end a life, but if you don’t understand that statement, you likely don’t understand Hunter S. Thompson. 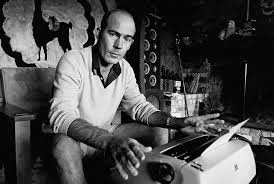 When I was younger, a lot of people were concerned about my adoration of Hunter S. Thompson. Texts like Fear and Loathing in Las Vegas and “The Kentucky Derby is Decadent and Depraved” were morality tales for most of my friends and family – stern warnings about the dangers of excess. To me, they felt like challenges. Thompson’s tales of excess felt heroic to me. Growing up in the realm of Bartles & Jaymes wine coolers and curfews and keggers, Thompson’s willingness to push things to the exhaustible edge felt revelatory. Because not only was Thompson regularly obliterating his senses, he also seemed to be having fun. More importantly, through that massive haze, he regularly wrote with a brutal wit and genius’ insight. To me, watching Thompson live and write was like a young basketball player studying Michael Jordan with the dream of someday playing at that level. The idea of simultaneously deconstructing consciousness while still being able to observe and articulate the absurdities of the plane I had just leveled with drugs or alcohol or fast cars was like magic to me. People watched me take my early teenaged steps towards recklessness, and they worried about the typical consequences: alcoholism, addiction, poverty, jail. But they missed one thing. Despite the gallons of alcohol he consumed and the metric tonnes of drugs he consumed over a lifetime, Hunter S. Thompson never fit that mold. That was the inspiring thing about him. Thompson seemed to be the embodiment of the William Blake quote, “The path of excess leads to the palace of wisdom.” And while Thompson appeared to have reached the palace, my friends and family were more fixated on the charred skeletons who had died along the side of the path. 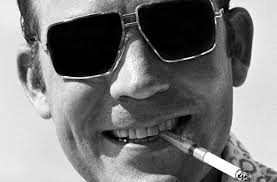 Anyone who has ever dealt with addiction realizes that there is a moment at or near the bottom when the addiction becomes, admittedly, downright boring. There’s nothing enjoyable left in it. You’re no longer feeling drunk or chasing a high, you’re merely clawing each day to keep things (barely) together. And to many, this exhaustion of the spirit is the end result of excess. There are few things as boring as a prolonged addiction; it’s the same day, lived over and over and over. And it was easy for people to see Thompson that way. After all, he drank every day. He used drugs every day. He smoked every day. All of that was true, but it ignored a few other facts. Thompson also read every day. Voraciously. He not only consumed the world news in amounts that would boggle most people’s minds, he regularly talked about it with friends, some of whom were the world’s top news reporters. He also read classics of literature with a revelry that bordered on worship. Thompson was known to type The Great Gatsby word for word, just to try to feel what it was like to write The Great Gatsby. He loved playing sports and watching sports. He loved music and motorcycles. Most importantly, he wrote every day. A lot. And then there were “the games”. When John Cusack first went to Woody Creek to meet Hunter, he found Hunter to be fairly quiet and distracted. Thompson was working and seemed lost in thought and somewhat aggravated at Cusack’s presence. When Cusack finally mentioned that Johnny Depp had promised him a good time at Woody Creek, Thompson replied, “Oh, there will be games.” And there were. “Games” for Thompson could be guns or explosives or fireworks or flamethrowers or crossbows. Whatever the game was, it usually brought destruction with it. People may have labeled Thompson with the back-handed “functioning alcoholic” label, but Thompson was a writer who never lost his natural curiosity. He may have relied on tried and true methods (drugs, alcohol, destruction), but the purpose was always the same – a childlike curiosity to see what would happen next if he took one more step, one more sip, one more toke, one more explosion. 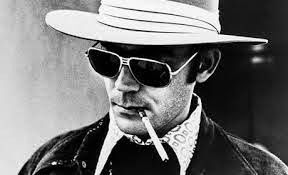 The trick Thompson figured out was how to make life a constant source of curiosity. Most wannabe writers have trouble finding the time in the day to write. When they make the time, many have trouble staying on task. In some ways, being a good writer is as simple as training a dog - one first needs to master “sit” and “stay”. But once a writer has made time to write, then they have to plumb their own thoughts for ideas and for directions. It’s a pursuit that requires curiosity and a willingness to make mistakes; few people have the mental framework required for that type of pursuit. Hunter Thompson’s entire life was designed to facilitate that process. Not only did Thompson’s life not experience the exhausting boredom of addiction, it wasn’t even structured to allow it. To view Hunter Thompson’s life as repetitive or boring is to fail to understand what makes an artist create. And even if I didn’t consciously understand that in 1987, it was something I could intuit from the hectic lifestyle and the mordant wit and the insightful brilliance. 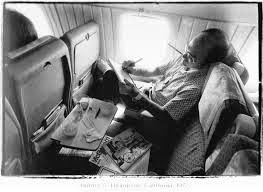 For some people, life is a zero-sum game between exhaustion and curiosity. We fight through the exhaustion because the curiosity is still worth it. The drive to see just what might happen next is just enough to continue to march through this life, no matter how exhausted we may be with so much of life. At age 67, Hunter Thompson took a look at his life. His physical health could no longer support his curiosity. The political landscape of America had settled into a mediocre status quo that no longer demanded examination. Many of his friends had died, and his habits foretold the kind of boring addiction that exhausted people. And so he checked out. Which is unfathomable to most people, who attempt to live without exhaustion or curiosity. But when Hunter Thompson took his own life so swiftly and so violently ten years ago, he left a simple reminder to follow that curiosity. It was a simple reminder to regularly "sit" and "stay"in those moments of curiosity, and to explore the world around me and within me. Never mind if it looks destructive. Never mind if it makes no sense. Never mind if it frightens the people around me. Because I've seen exhaustion, and there's no point to it. And I've seen the way out. In the moments when exhaustion comes around to break us down, that curiosity is all you need to keep going - too curious to die.