June 24: ROY O. DISNEY – Behind Every Dreamer, A Realist

Near the end of their lives, my grandmother shared a number of stories about the early years of her marriage to my grandfather. Despite leaving school in the ninth grade, my grandfather’s tireless work ethic and indefatigable belief in himself had led to numerous successes as a small businessman, and he and my grandmother had amassed a healthy retirement savings. My grandmother had more than a few stories of my grandfather believing in family and friends who had regularly proven themselves undependable. Yet my grandfather was always willing to support the people he cared about. In a number of cases, my grandfather lost his entire investment, but over the years my grandmother had learned not to hold a grudge against my grandfather’s support of oft-losing causes. When I asked her why, she answered confidently that she came to know that my grandfather would just work hard enough to make everything right again. It was a rare set of skills which my grandfather displayed over and over throughout his life – the ability to bet on people, but also hedge the bets with his own hard work and ingenuity. It’s not a tactic for the faint of heart, and most people would quickly grow frustrated and filled with contempt, but not my grandfather. Throughout his life, he supported the dreams and goals of the people he card about – however misguided they may have been – without asking for recompense or to share in the spoils. There are few people with that kind of attitude, but some have gone on to support some of the world’s greatest visionaries, including Roy Disney, the older brother of Walt. 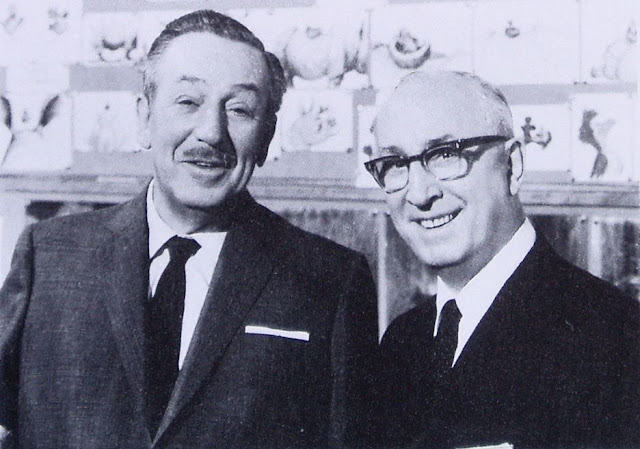 Roy and Walt Disney grew up in the Midwest with a close filial bond. The Disney brothers both worked hard on a shared Kansas City Star paper route owned by their father, and both shared aspirations of owning a creative business that would allow the young Walt to express himself artistically. Roy moonlighted during his early career as a bank clerk by helping Walt keep the books at a fledgling animation and cartooning company. World War I, the shifting economic opportunities of pre-war America, and tuberculosis eventually moved Roy all over the country. Around the time Roy settled in Los Angeles, Walt was running a struggling animation company. But Walt wanted to work with the person he trusted the most, his brother Roy. Walt packed up and moved to Los Angeles, buying a home next door to his brother. Roy and Walt founded Disney Brothers Studio. Soon after arriving in Los Angeles, Walt found some success with his primary cartoon property, Oswald the Rabbit. However, without Roy’s direct influence, the distributors of the cartoon were able to cheat Walt out of the property entirely. On a train ride back to Los Angeles after losing Oswald, Walt created the idea for Mickey Mouse, and would quickly churn out the first Mickey Mouse cartoon, Plane Crazy with contract and financial guidance from Roy. But Walt knew that the key to making Mickey Mouse a household name lie in adding sound to his cartoons. Cartoons had been given audio tracks before, but Walt wanted to synchronize the tracks, not just play background music. He wanted to elevate cartons to the quality of the feature films they supported. It was an unheard of concept, visionary and far-reaching. But it would require money. And so the visionary Walt turned to his brother Roy. 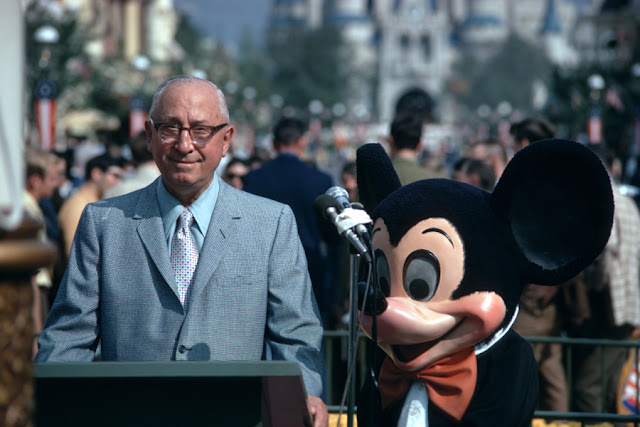 From the formation of Disney Brothers studio until Roy’s death in 1971, the Disney brothers had a familiar relationship. Walt was an artistic visionary, and it was Roy’s responsibility to ensure that the vision was realized. Most of the time that meant raising money. But Roy was also frequently a project manager, a construction foreman, a negotiator, an auditor, and enforcer, and a bit of a magician. When Walt approached Roy about adding sound to the cartoon Steamboat Willie, Roy borrowed some money against the equity in his house, took money out of his life savings, then pounded the Los Angeles pavement to strike a partnership with a man named Pat Powers who would loan them sound equipment for the exclusive rights to distribute the cartoon. Roy and Powers created the contract to ensure Walt would not get cheated out of the property. Then Roy handled the hiring of the sound artists and musicians. Walt’s brilliance in creating a soundtrack for Steamboat Willie - this was before the time of overdubs or multi-track recording, so the entire cartoon soundtrack had to be recorded in a single take – was obvious, and the cartoon became a massive, worldwide hit. Roy realized quickly that not only was Pat Powers withholding distribution royalties from Walt, he was positioning to take over Disney Brothers Studio. Roy quickly moved to protect his brother from Powers’ power-grab, and wrestled 100% of control back into the two brothers’ hands. Powers moved on (taking some of Walt’s key animators with him), but Mickey Mouse remained in the Disney brothers’ possession.

The pattern continued for years. When Walt decided a finished cartoon should be scrapped and started over to create the first color cartoon, it was Roy who had to figure out how to pay for it and how to create entire new departments to accommodate color painting and inking and film processing. And Roy was not on stage when Walt accepted the first Academy Award for a cartoon. When Walt decided to make the first feature-length cartoon with Snow White and the Seven Dwarves, Roy had to convince numerous bankers of the financial viability of that sizable investment. When Walt continued to throw out large sections of the film and go back to the storyboard (inflating the budget from $500K to $1.5MM), Roy was responsible for finding more money. When Walt decided to create a multi-plane camera, Roy found the financing. When Walt decided to move into television, Roy arranged the financing. With each step forward that Walt’s vision took them, Roy was leveraging themselves to the brink of bankruptcy to pay for it. Everything they owned and everything they could borrow was gathered by Roy with the belief that his brother’s vision was worth the risk. When Walt decided to create an amusement park, despite unimaginable wealth, Roy once again leveraged everything the families had or could borrow on the idea of Disneyland. Where Walt would wander the grounds of the former Anaheim orange grove and see castles and rockets and western saloons and main streets and mountains, Roy oversaw the day to day operations and made sure the bills were paid. When Disneyland opened in 1955, it cemented Walt Disney’s legacy as one of the world’s greatest innovators. But few people at that time even knew that Disney had a brother. 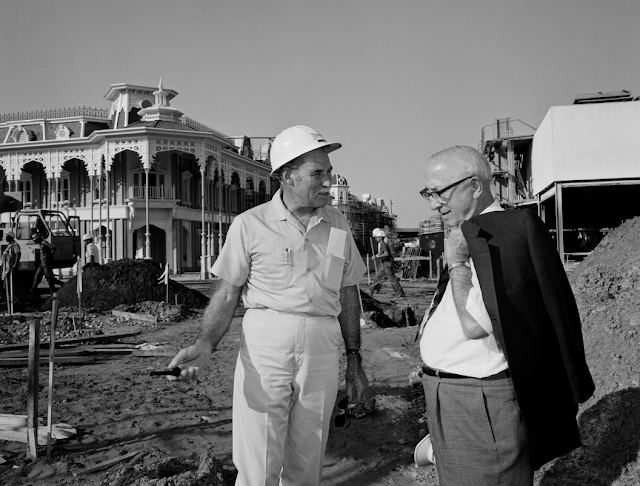 It takes a special person to support the dreams of others while putting yourself at risk. When asked why Roy Disney would have been willing to leverage his own wealth for his younger brother, Roy’s son Roy E. Disney answered honestly, “I think he really wanted his brother to be able to do anything he wanted to do. Because he recognized the power of those ideas.” There was no profit motive for Roy. There wasn’t even a broader “it’ll be good for humanity” reason. It was love, plain and simple. Roy loved Walt and believed in him, and was willing to sacrifice for Walt’s vision. It’s only a belief you can have if you’re secure enough in yourself to allow someone else the spotlight, but also to know that if the other person fails, you can pick yourself back up after everything collapses. One thing we always used to say about my grandfather was that the words “I can’t” were not in his vocabulary; I would imagine Roy Disney was the same. Had Walt Disney bankrupted Roy Disney or had my great-uncle bankrupted my grandfather, I sense both knew they would be able to recover. It’s a fascinating mixture; to have enough self-confidence to allow a person to love and trust unconditionally. And it’s inspiring to believe that the more we love and trust ourselves, the more capacity it creates for us to love and trust others.

Two stories come to mind when I think of Roy Disney. In one story, Roy walked into Walt’s office one day and saw Walt practicing his signature on his drawing board. He and Roy talked, and as Roy exited the room, Walt off-handedly commented, “By the way, I’m changing the name of the company from ‘Disney Brothers Studio’ to ‘The Walt Disney Company’.” And then he went back to practicing his autograph. When Roy was asked why he didn’t object, he simply responded, “It didn’t matter to me. And it’s what he wanted.” In the other story, Walt died in the middle of the creation of Disney World in Orlando, Florida. Roy was nearing retirement and had hoped to retire before the construction of the park. But since the brothers had leveraged their life savings to build the park, Roy postponed his retirement to ensure two things: that the park would be built to Walt’s visionary standard, and that the park be renamed Walt Disney World, in honor of his brother. When the park was finished and Roy was satisfied, Roy Disney retired from Walt Disney Studios and within a few months, died peacefully in his sleep. It was years before a statue of Roy was finally erected in Walt Disney World. 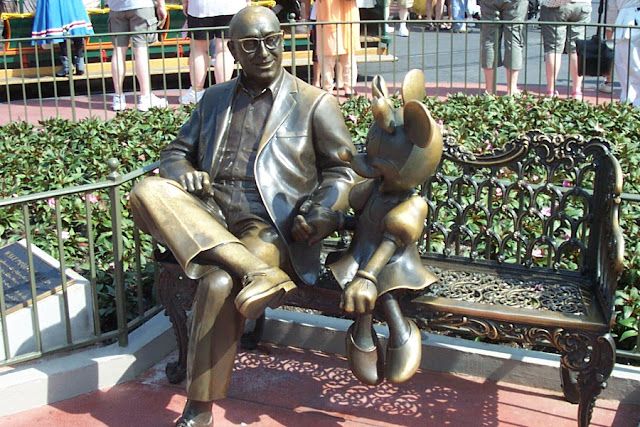