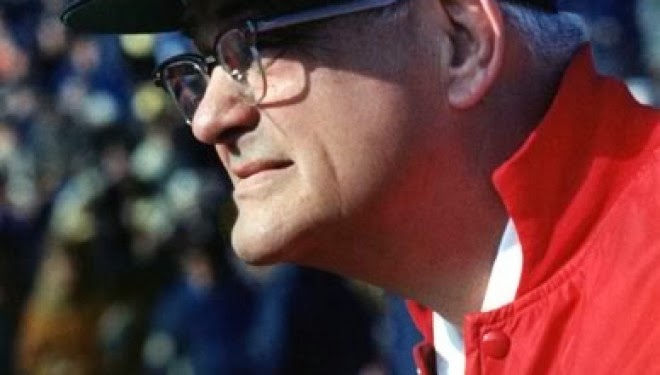 I've never been a huge sports fan, and even less as an adult. I still follow what's left of boxing. I half-heartedly follow NASCAR and PBRA. The only sports that seem to hold my interest are specific teams that I follow out of family tradition. My family had a typical number of family traditions growing up, but none were as dramatic and intense as Ohio State football. Both my father's and my mother's sides of the family followed Ohio State football. We were one of the few branches of the family tree who had left the state, so when I was growing up outside of Ohio, I always looked forward to fall and winter trips to Ohio. I knew my family would talk Ohio State football. I knew we'd go to my great-aunt and great-uncle's to watch whatever game was on TV. I knew the family would break out Ohio State mugs and glasses and scarlet-and-gray sweaters. I knew they'd speak of Woody Hayes and Archie Griffin in reverent tones. I knew they'd be amazed by Art Schlichter. More than anything, I knew Ohio State football was the one thing that would bring our family together. It was the one topic we all agreed on, and the one thing we all supported. If there was one way we could define ourselves, it was that we were all Buckeye football fans. As I grew older and cared less and less about football, my love for Buckeye football never waned.

My family was no different from any other Buckeye football fan families in our love for Woody Hayes. 205 wins, five National Championships, three Heisman Trophy winners. Woody's tenure was as legendary as you would ever want from a head coach. On top of it, Woody's attitudes on winning and responsibility and turning the young men who played for Ohio State into responsible men was a real point of pride amongst the Buckeye faithful. And despite what the detractors say, Woody's attitude seemed to really take hold. I can't think of a single player who claims to be worse off for having played under Woody, but to this day, former players still regularly sing his praises and credit his teachings for many of their life's successes. To say Woody Hayes is treated like a God in Ohio is far from euphemism. Woody has not coached in 35 years, and has been dead for more than 16 years, yet I have a large autographed poster of Woody hanging above my work desk. My parents have a dog named Woody. 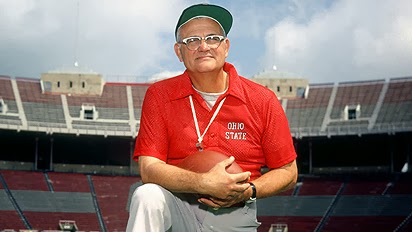 The alienating thing about sports fans is that so many of them attach their adoration to the win/loss columns, strategies, and occasionally, a design styling of the uniform. But Woody Hayes left a legacy that was more interested in victories based on learning. Woody was a lifelong student of history, and seemed to live by the maxim that those who did not learn from history were doomed to repeat it. Woody made mistakes. His teams made mistakes. But repeated mistakes were not tolerated. And forgetting about a mistake and then repeating it was a terminal offense. Woody Hayes was a coach upon whom you could not only pin your win/loss dreams, but who you could be proud to follow. Which makes the events of the 1978 Gator Bowl so surprising. 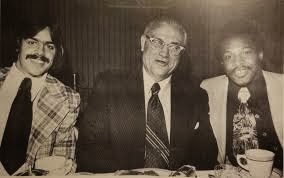 I remember my family gathering for the Gator Bowl at my great-aunt and uncle's house. Near the end of the game, Ohio State (at the time a perennial national powerhouse) was two points behind Clemson, a team that had yet to prove itself as a national contender. Late in the game, Clemson was running out of stream as the Buckeyes drove into field goal territory. Immediately before the final drive to put the Buckeyes either in touchdown or field goal position, Woody Hayes grabbed freshman quarterback Art Schlichter's facemask and warned him to do anything but throw an interception. Needless to say, Schlichter tossed a short pass over the middle where it was intercepted by second-string nose guard Charlie Baumann. Baumann ran over to the sideline and was pushed out of bounds right in front of Woody. Woody grabbed Baumann by the jersey and slammed his fist into his throat. The actual physical assault was irrelevant; Woody was a 65-year old man punching a 19-year old Division I nose guard. But the line crossed was unbelievable. Stories of Woody hitting his own players was legendary. Many players have commented that playing four years for Woody without getting hit was actually a failure; it meant you weren't worthy of being noticed by him. But to hit an opposing player was an unpardonable sin.


It was such a sin, what I remember most about the game was my father and great-uncle trying to figure out if Woody had actually hit Charlie Baumann. In 1978, the number of cameras was limited. The punch had only been captured on one camera, and while it certainly looked like Woody had punched Baumann, it was such an anomaly announcers Ara Parseghian and Keith Jackson never mentioned it. There had been an on-field brawl after the punch, but nothing was ever mentioned. The punch was never replayed during the game, and I can recall my father and great-uncle being surprised and disappointed at the possibility. Ohio State fans were looking for answers, and trying to make sense of what they'd seen. 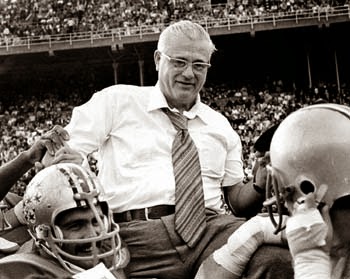 Later, it would come out that immediately after the game, Ohio State athletic director had talked with Woody about the punch. The athletic director had played for Woody when Woody was a coach at Miami University, and had coached for Woody at Ohio State. He offered Woody the chance to resign, and possibly blame it on Woody's issues with diabetes, which Woody had denied for years due to his busy schedule. But Woody refused. That would be too easy on the university, he explained, and it would erode the credibility of the program. Woody insisted that the university fire him immediately. Ohio State detractors would later claim that Woody never apologized for the punch. However, Baumann admits that Woody later called him and while he never explicitly said "I apologize", they had a cordial discussion and hung up with no hard feelings. But Woody's dismissal - more importantly, his insistence on being dismissed - was an overt admission of the action and the impropriety of it.

The thing about being a Buckeye fan isn't just a matter of wins and losses. Al Davis' "Just Win, Baby" attitude would not play in Columbus. For Ohio State fans, it's a process of continuous improvement. Mistakes will be made. Some will be small. Some will be horrible. But each misstep is an opportunity to learn and stand up and improve. When your family places so much importance on a thing, it's a comfort to know that - even in its darkest hours - things will continue to improve. History has proven that.